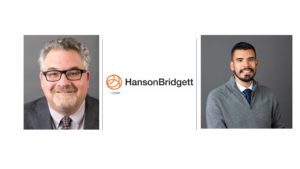 Hanson Bridgett LLP earned a great result for their client, Vista Distribution, Inc. a cannabis distribution company. Partner Andrew Stroud and Associate David Casarrubias achieved a significant victory after a four-day trial in Ukiah, California. The jury returned a unanimous verdict in favor of the firm’s client in a breach of contract action filed against them.

After just one hour of deliberations, the jury found that Vista Distribution had not entered into the alleged contract at all. The firm also managed to get Vista’s CEO dismissed from the action before trial, and a Directed Verdict granted against the owner of the Plaintiff LLC for lack of standing.

Stroud is recognized as one of Sacramento’s top civil litigators. He has served as outside litigation counsel for three California Governors: Governor Gray Davis, Governor Arnold Schwarzenegger and Governor Jerry Brown. As litigation counsel,

Stroud has represented the State of California in many complex and high-profile actions, including the challenge to Proposition 8, which ultimately led to the legalization of same-sex marriage in California. He has represented both regional and national companies in commercial and business litigation as well.

Casarrubias focuses on litigating a variety of business disputes and has a robust practice representing government agencies throughout California in complex class actions and other multiparty litigation. His experience also includes writs, appeals, and law and motion in both state and federal court. Casarrubias maintains an active pro bono practice and serves on Hanson Bridgett’s Pro Bono Committee.