USLAW NETWORK, Inc. (USLAW) has created the Bill Burns Award to annually recognize a client who has shown outstanding service and dedication to USLAW. The Award is named after Bill Burns, the recently retired vice president of liability claims for Landstar System, Inc., a Jacksonville, Florida-based transportation company. Burns also has been named the first recipient of the Award and received it during the recent Spring 2016 USLAW NETWORK Client Conference.

“When USLAW was founded in 2001, Bill was one of the first clients – and an industry leader – who really supported USLAW and what we were creating,” said Thomas L. Oliver, II, Chair of USLAW, and a founding shareholder in USLAW member firm, Carr Allison in Birmingham, Alabama. “He was with us in the very beginning and has been a tremendous supporter of USLAW throughout our first 15 years. We wouldn’t be here if it wasn’t for clients like Bill who have stood by us, given us advice, been dedicated to the network and reached out to our lawyers and used them on cases. From this point forward we will present a client award – the Bill Burns Award – for that client who has shown outstanding service and dedication to USLAW and on behalf of the entire USLAW membership I am very pleased to present the first Award to Bill (Burns).” 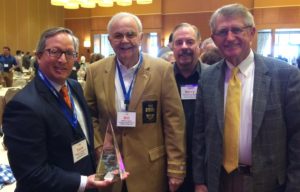 When USLAW was founded in 2001 there were just a handful of firms and their clients, including Burns, and they wonderfully supported the concept of USLAW, which included the creation of a network of smaller, regionally based, independent firms with the capability to respond quickly, efficiently and economically to client needs. Today USLAW includes approximately 100 independent, full-service firms with roots in civil litigation, including more than 6,000 attorneys covering the United States, Canada, Latin America, Europe, Asia and Africa.

Bill truly understands that this organization is built on relationships. I knew Bill 10 years before we started USLAW. For years and years, he and I knew each other as friends, and eventually the business relationship developed. For the transportation group, Bill was always giving us that sage advice that we needed from a leader in the industry.  — Barry Clifford Snyder | Snyder Law, LLP | Santa Barbara CA

When USLAW was forming, we consulted with Bill about the idea. He liked the idea. He was one of the first to stand behind us. This Award isn’t only about Bill Burns – it’s also about people like Bill Burns who were there with us at the start. Keith Dunlap, Bob Lund and others – who were there with us when we started. Bill is absolutely the perfect model for what we need in risk management today. Bill taught me through the process of 27 cases that I worked on with him – that he sent me to defend -24 of them were resolved without one deposition being taken. The savings he created for Landstar, the empathetic approach he took, his honesty, his overwhelming loyalty. I will never forget. He’s awesome. – Charles F. Carr | Carr Allison  | Birmingham, AL

Bill Burns recently retired as vice president of liability claims for Landstar System, Inc., a Jacksonville, Florida-based transportation company. A 1968 graduate of the University of Kentucky, Mr. Burns has been with Landstar for 42 years. He has experience in every aspect of claims handling and is licensed as a Property and Casualty Adjuster in many states. He also has training in the areas of accident investigation, accident reconstruction, personal injury evaluation, and litigation preparedness. Mr. Burns’ responsibilities at Landstar included supervision of personal injury claims with his personal interaction in catastrophic cases, and the oversight of claims in litigation. He worked closely with defense counsel in negotiating settlements and preparing cases for trial.