Steve concentrates his practice as a trial attorney representing clients in cases involving catastrophic loss, death, and serious property damage. He also represents clients in all manners of commercial disputes including breach of contract, debt collection, and business reputation damages.

Steve regularly litigates products liability matters, representing international and domestic manufacturers, designers and distributors of consumer and industrial products in claims for strict liability, negligence design and manufacturing, failure to warn, and breach of warranties. He also routinely represents motor carriers, brokers, and their insurers, in liability and coverage claims.

Steve’s experience in construction law involves representing builders, developers, and contractors in all types of disputes related to claims of construction defects, worksite incidents and injuries, and also the enforcement and defense of mechanic liens. Before joining the Firm, Steve prosecuted construction defect claims for homeowners and developers, which lends a unique perspective on how to best represent his clients in often large and complex matters.

In addition to his active litigation practice, Steve advises clients in crisis-management practices when they are connected to losses involving high-exposure and publicity and oversees a 24/7 emergency response team for several of his transportation and construction industry clients. He also advises the Firm’s Workers’ Compensation clients as to their subrogation rights and interests in Third-Party claims.

Steve graduated law school with the honor of Order of the Barristers. During law school, he served as a law clerk for the United States International Trade Commission. Prior to law school, he received a one-year fellowship from West Virginia University to work in London as a researcher for two members of the British House of Commons.

Steve’s interests outside of work include travel, taking in Broadway shows, following WVU sports, and teaching pageantry arts to high school students in several competitive marching bands in Maryland. Steve is a proud alum of the Cadets (97-99), a drum and bugle corps, where he won a world championship as a member in 1998. He is also an amateur baker (ask him about his secret recipe for chocolate chip cookies) and can most often be found swimming laps in his local pool. 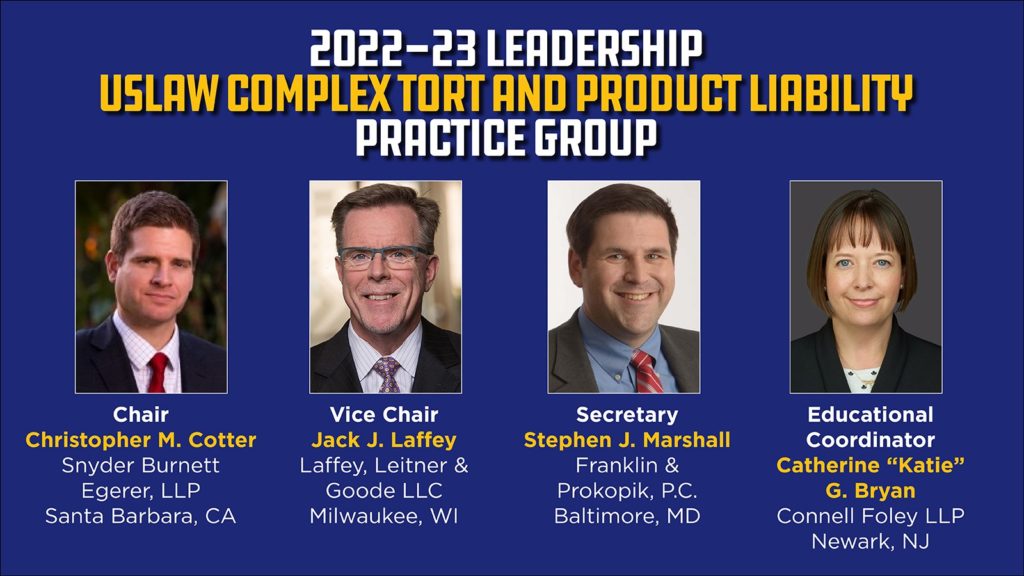 We are pleased to announce the 2022-23 leadership for the USLAW NETWORK Complex Tort and Product Liability Practice Group.                       For more information about this practice group or attorneys in this group, click here. Continue Reading